The words breach attack simulation (BAS) and breach attack emulation (BAE) are often used interchangeably but they are certainly not the same thing. The difference between attack simulation and attack emulation is the word emulation means “to behave in the same way as someone else” while simulation means “to produce something that is not real but has the appearance of being real.” When it comes to emulation vs. simulation in terms of cybersecurity, emulation duplicates while simulation replicates a real device. The purpose of both programs is to test a company’s security and see how well it can defend against real-world attacks. Simply put, it’s a rehearsal to see how well a company’s security controls function.

What is Breach and Attack Emulation?

Within cybersecurity, a breach and attack emulation platform uses threat intelligence to duplicate the exact Tactics, Techniques, and Procedures (TTPs) that a threat actor would use and test them in your environment. In contrast, breach and attack simulation may look like a real attack but the TTPs used are up to the discretion of the security professionals doing the testing. An attack simulation does mimic a real-world attack to some extent, but it doesn’t always reflect the TTPs used by a particular threat actor which causes testing to be unreliable. See the illustration below from Nviso Labs: 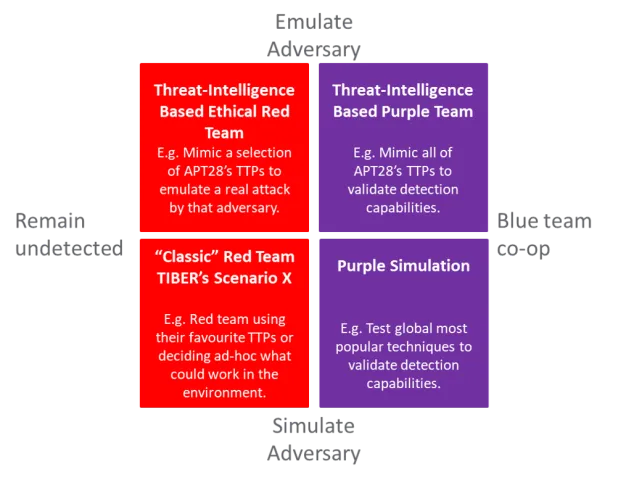 Attack Simulation vs. Attack Emulation: Which is Better?

The biggest difference between attack simulation and attack emulation is attack emulation shows the threat actors’ strengths and weaknesses giving it an inherent advantage over attack simulation. During a red team exercise, you want the blue team to be able to protect against and recognize the attack of your threat actors. In an attack simulation where the red team can use custom tools, they may be able to recreate the exploitation aspect but if they aren’t using the same tools and making the same mistakes that threat actors use, the blue team will not be able to create defenses that detect those same mistakes. It’s important that the same tools and the same mistakes that threat actors use are recreated during security tests. It’s incorrect to think that you should make your attacks as customized and refined as possible, it’s best to replicate exactly what your blue team will be responding to in a real-world scenario. This is one of the biggest problems with modern-day red teaming. Also, if you are using a machine learning or AI-based solution, simulated attacks can cause the solution to learn the wrong behavior. This is because these attacks are not based on the latest threat intelligence of what threat actors are using.

Additionally, because attack simulations are not real attacks, they run the risk of not being recognized by security controls as a threat. What this means is you can’t be sure the controls will work in a real-world scenario. Furthermore, many BAS solutions are unable to test all the different aspects of IT infrastructure and are limited only to the security of endpoints. While in comparison, breach and attack emulation solutions are more dynamic in nature and can test a wide variety of systems within a company’s environment. Lastly, most breach and attack simulation platforms typically charge per attack vector, so you will end up having to invest a large amount of money if you want to test all of your security controls.